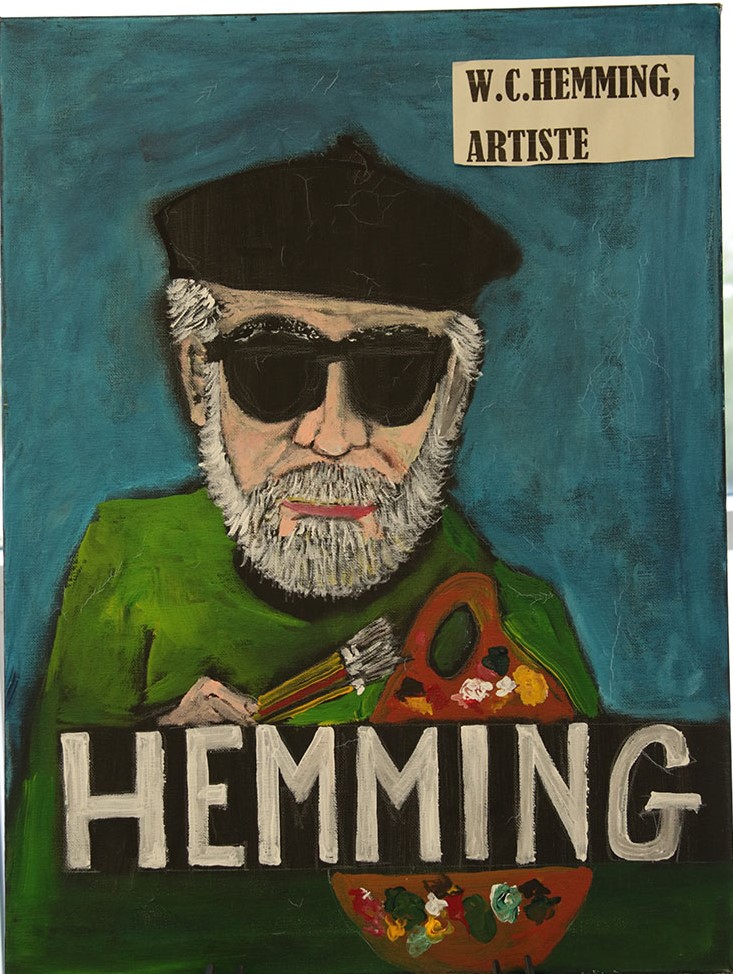 Photo of poster by Hillary Jones

The origins of my art come from forms of "EXPRESSIONISM" in both the earlier form of German Expressionism in 1905 under Franz Marc using bold colors with emotional directness and unusual brushwork; and also "THE BOSTON EXPRESSIONISM of 1940 through 1956. Boston Expressionism mainly shown in the work of Hyman Bloom, Karl Zerbe and Jack Levine. It featured dark humor, social commentary, figurative art and bold colors.

In high school I had favorite artists that I enjoyed and studied their works: JACK LEVINE, CHARLES BRAGG, and THOMAS NAST. Jack Levine did such masterpieces as "GANGSTER'S FUNERAL" and group figures of political and very dark humor. The late Charles Bragg was a master of expression and silly and profound scenes of ordinary human life making life a huge insane asylum. These expressionist painters influenced me over fifty years.

My current show displays both figurative work and landscape work of recent years. A quasi-gothic approach to nature and using vivid colors. Examples of this sort of expressionism can be seen in my "MARTIAN SUNRISE" and portraits of "WARREN OATES" and "HAWKING" (where I combined the late scientist image with his theory on a blackboard.) I try to usually choose icons that can easily combine familiarity with a theme.

I was trained at the COLUMBUS COLLEGE OF ART AND DESIGN and the OHIO STATE UNIVERSITY. My first ONE MAN SHOW was at the Columbus Cultural Arts Center and displayed at COLUMBUS CITY HALL. In 2003 I showed 15 paintings in the Gothic Quarter of Barcelona, Spain. I have been painting for fifty years.

For more information about this artist, please see links to previous exhibits by W.C. Hemming below:

Who's scheduled to exhibit art in the library 2018:

Are you an artist in the Columbus, Ohio area?

Are you interested in exhibiting your artwork in Columbus State's Library?

See art and artist information from previous exhibits in the Gallery Exhibit Archives.