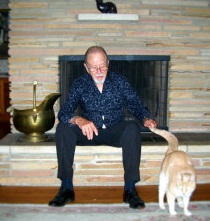 Profile:  Born in NYC 1929 from Cuban parents.  Raised in Cuba where he studied Architecture at Havana University, 1947-1954. Self-taught painter.  Signs as Bono.  Acquired the basic knowledge for painting during his studies of Architecture.  Attended workshops of Joseph Albers in 1952, influenced by German Bauhaus philosophy.  Initiated his artist work in Madrid during 1968 using realism as his initial expression and gradually modified his work into geometric forms.  Studied the life, philosophy, techniques, and work of Joseph Albers, Piet Mondrian, Ellsworth Kelly, Burgoyne Diller, etc.  All of them in the geometric field.  Paintings and constructions are done with acrylic, alkyds on canvas, masonite, plexiglass, and non-conventional materials.

Bono considers architecture and painting professions for the improvement of human social conditions.  Based on this concept, he has created two Series of paintings and constructions.  First, the "Possibilities" series formed by abstract geometric pieces with striking colors with the purpose to generate reflective thoughts in the viewer.  Second, the "Bad and Sad" series which effects all levels of society showing cases at global terms with the hope that it will increase awareness and solutions for specific problems.  He conducts a constant searach for new forms of visual representation under deconstructionist philosophy.

Bono's work has been displayed and collected throughout the USA, Europe, and South America.

Out of the Box: Selected works by Wilfredo Calvo Bono

Are you an artist living and working in the Columbus, Ohio area?

Are you interested in exhibiting your artwork in the Columbus State Library?

For more information, contact Shona Wainwright
by phone at (614) 287-2461 or by email to swainwri@cscc.edu.