McGonigal: Be a Gamer, Save the World

“Be a Gamer, Save the World”
Jane McGonigal

Originally published in the Wall Street Journal in 2011. Reprinted with permission from Jane McGonigal, all rights reserved.

Videogames make players feel like their best selves. Why not give them real problems to solve?

We often think of immersive computer and videogames—like "FarmVille," "Guitar Hero" and "World of Warcraft"—as "escapist," a kind of passive retreat from reality. Many critics consider such games a mind-numbing waste of time, if not a corrupting influence. But the truth about games is very nearly the opposite. In today's society, they consistently fulfill genuine human needs that the real world fails to satisfy. More than that, they may prove to be a key resource for solving some of our most pressing real-world problems.

Hundreds of millions of people around the globe are already devoting larger and larger chunks of time to this alternate reality. Collectively, we spend three billion hours a week gaming. In the United States, where there are 183 million active gamers, videogames took in about $15.5 billion last year. And though a typical gamer plays for just an hour or two a day, there are now more than five million "extreme" gamers in the U.S. who play an average of 45 hours a week. To put this in perspective, the number of hours that gamers world-wide have spent playing "World of Warcraft" alone adds up to 5.93 million years.

These gamers aren't rejecting reality entirely, of course. They have careers, goals, schoolwork, families and real lives that they care about. But as they devote more of their free time to game worlds, they often feel that the real world is missing something.

Gamers want to know: Where in the real world is the gamer's sense of being fully alive, focused and engaged in every moment? The real world just doesn't offer up the same sort of carefully designed pleasures, thrilling challenges and powerful social bonding that the gamer finds in virtual environments. Reality doesn't motivate us as effectively. Reality isn't engineered to maximize our potential or to make us happy.

Those who continue to dismiss games as merely escapist entertainment will find themselves at a major disadvantage in the years ahead, as more gamers start to harness this power for real good. My research over the past decade at the University of California, Berkeley, and the Institute for the Future has shown that games consistently provide us with the four ingredients that make for a happy and meaningful life: satisfying work, real hope for success, strong social connections and the chance to become a part of something bigger than ourselves.

We get these benefits from our real lives sometimes, but we get them almost every time we play a good game. These benefits are what positive psychologists call intrinsic rewards—we don't play games to make money, improve our social status, or achieve any external signposts of success. And these intrinsic rewards, studies at the University of Pennsylvania, Harvard and U.C. Berkeley have shown, provide the foundation for optimal human experience.

In a good game, we feel blissfully productive. We have clear goals and a sense of heroic purpose. More important, we're constantly able to see and feel the impact of our efforts on the virtual world around us. As a result, we have a stronger sense of our own agency—and we are more likely to set ambitious real-life goals. One recent study found, for example, that players of "Guitar Hero" are more likely to pick up a real guitar and learn how to play it.

When we play, we also have a sense of urgent optimism. We believe whole-heartedly that we are up to any challenge, and we become remarkably resilient in the face of failure. Research shows that gamers spend on average 80% of their time failing in game worlds, but instead of giving up, they stick with the difficult challenge and use the feedback of the game to get better. With some effort, we can learn to apply this resilience to the real-world challenges we face.

Games make it easy to build stronger social bonds with our friends and family. Studies show that we like and trust someone better after we play a game with them—even if they beat us. And we're more likely to help someone in real life after we've helped them in an online game. It's no wonder that 40% of all user time on Facebook is spent playing social games. They're a fast and reliable way to strengthen our connection with people we care about.

Today's videogames are increasingly created on an epic scale, with compelling stories, sweeping mythologies and massive multiplayer environments that produce feelings of awe and wonder. Researchers on positive emotion have found that whenever we feel awe or wonder, we become more likely to serve a larger cause and to collaborate selflessly with others.

With so much blissful productivity and urgent optimism, stronger social bonds and extreme cooperation, it's not surprising that so many players feel that they become the best version of themselves in games. That's one of the reasons I believe we can take the benefits of games a step further. We can harness the power of game design to tackle real-world problems. We can empower gamers to use their virtual-world strengths to accomplish real feats. Indeed, when game communities have been matched with challenging real-world problems, they have already proven themselves capable of producing tangible, potentially world-changing results. 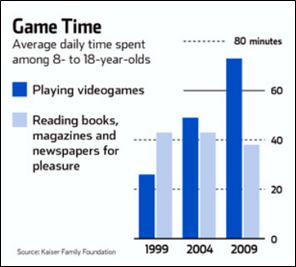 In 2010, more than 57,000 gamers were listed as co-authors for a research paper in the prestigious scientific journal Nature. The gamers—with no previous background in biochemistry—had worked in a 3D game environment called Foldit, folding virtual proteins in new ways that could help cure cancer or prevent Alzheimer's. The game was developed by scientists at the University of Washington who believed that gamers could outperform supercomputers at this creative task—and the players proved them right, beating the supercomputers at more than half of the game's challenges.

More recently, more than 19,000 players of EVOKE, an online game that I created for the World Bank Institute, undertook real-world missions to improve food security, increase access to clean energy and end poverty in more than 130 countries. The game focused on building up players' abilities to design and launch their own social enterprises.

After 10 weeks, they had founded more than 50 new companies—real businesses working today from South Africa and India to Buffalo, N.Y. My favorite is Libraries Across Africa, a new franchise system that empowers local entrepreneurs to set up free community libraries. It also creates complementary business opportunities for selling patrons refreshments, WiFi access and cellphone time. The first is currently being tested inGabon.

These examples are just the beginning of what is possible if we take advantage of the power of games to make us better and change the world. Those who understand this power will be the people who invent our future. We can create rewarding, transformative games for ourselves and our families; for our schools, businesses and neighborhoods; for an entire industry or an entirely new movement.

We can play any games we want. We can create any future we can imagine. Let the games begin.