Click on the links above to view the "Grasses" scroll and the creator(s)? chop marks.  The chop marks, if identified, are the signature of the creator(s) of this particular scroll.

On November 26, 2012, Columbus Sister Cities International presented Columbus State with the gift of a beautiful Chinese scroll with calligraphy of the poem "Grasses." This is a gift of Mr. Liu Xiaoming, the Deputy Chairman of Hefei Federation of Literary and Art.

The translation below was found at http://etext.virginia.edu/chinese/index.html thanks to Ba Lin (OSU Newark Economics).

Boundless grasses over the plain Come and go with every season;
Wildfire never quite consumes them --
They are tall once more in the spring wind.
Sweet they press on the old high-road
And reach the crumbling city-gate....
O Prince of Friends, you are gone again....
I hear them sighing after you. 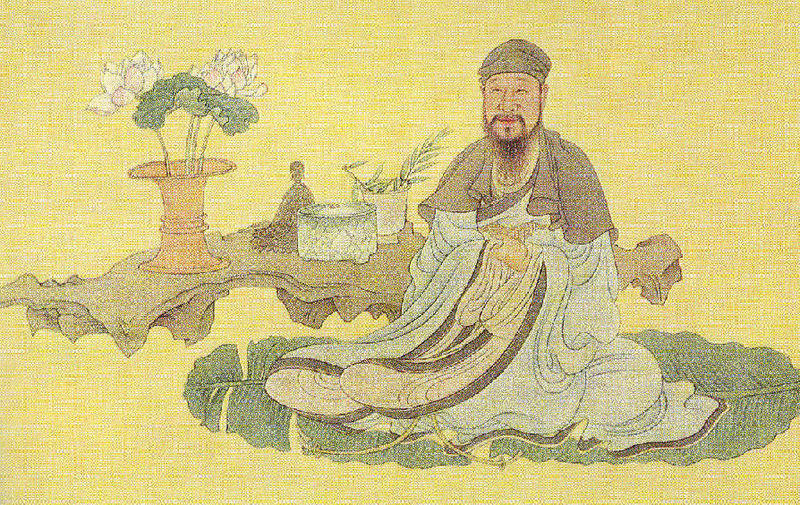 This image of Bai Juyi by Chen Hongshou, is in the public domain. Uploaded from Wikimedia Commons 18 Dec. 2012.

Come view this beautiful calligraphy on the 2nd floor of the Columbus State Library or click on the link in the box to the right.

Books to Find More Background Information About These Items

Books with more information about aboriginal art or the poetry of Bai Juyi are to be found in the Columbus State Library or through OhioLINK.

WAIGAN's Wandjina Figure, Front and Back 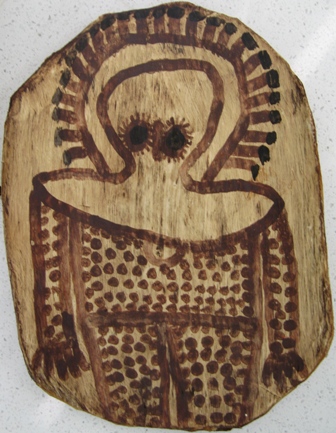 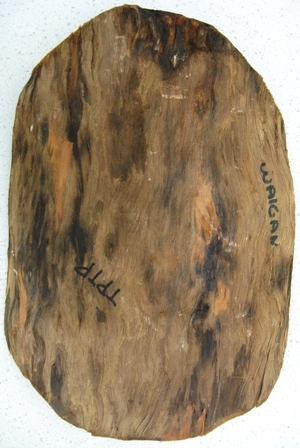 Click on the link above to see the descriptive plaque that accompanies WAIGAN's example of Wandjina art.

Other examples of Wandjina art and other aboriginal art is linked here. 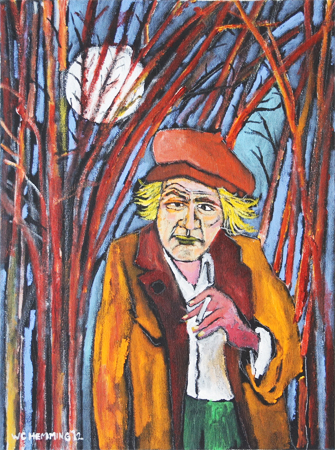 Thepainting above, "Nightcomers", is painted in vivid acrylic paints and is about 16" wide x 20" high. 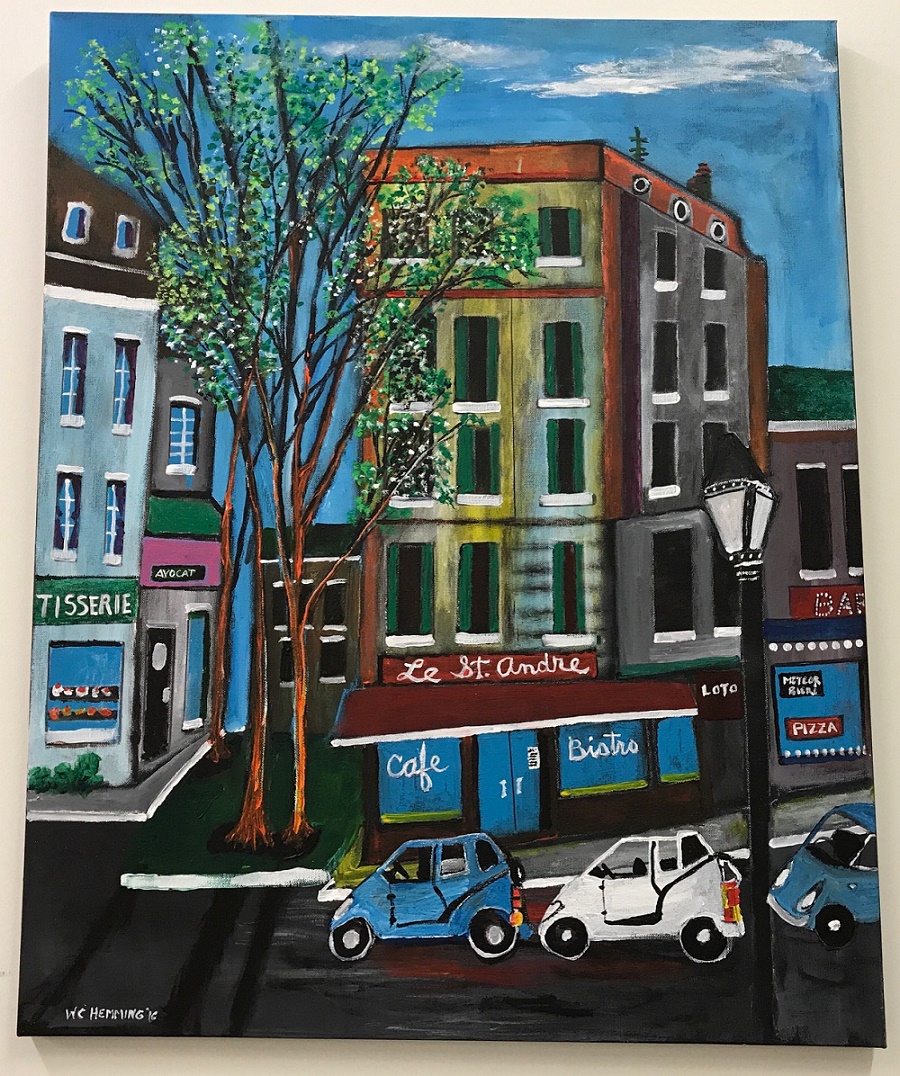 A second W.C. Hemming painting, "Rue St. Andre" has been generously donated to the library's art collection by Brianne Miller, August 2019.  This painting is 24" wide x 30" high and is vividly painted in acrylic paints on canvas.  W.C. Hemming painted this in 2016.

In 2018, artist Randy Jones has donated copies of two volumes called "Digital Dreams Pictures and Digital Poems".  They include wonderful digital photographs and personal writings.  They are on display on the third floor of the library in a vertical case.  They are stored flat and closed.  If you are interested in seeing what is in them, please contact Shona Nicol at snicol2@cscc.edu. 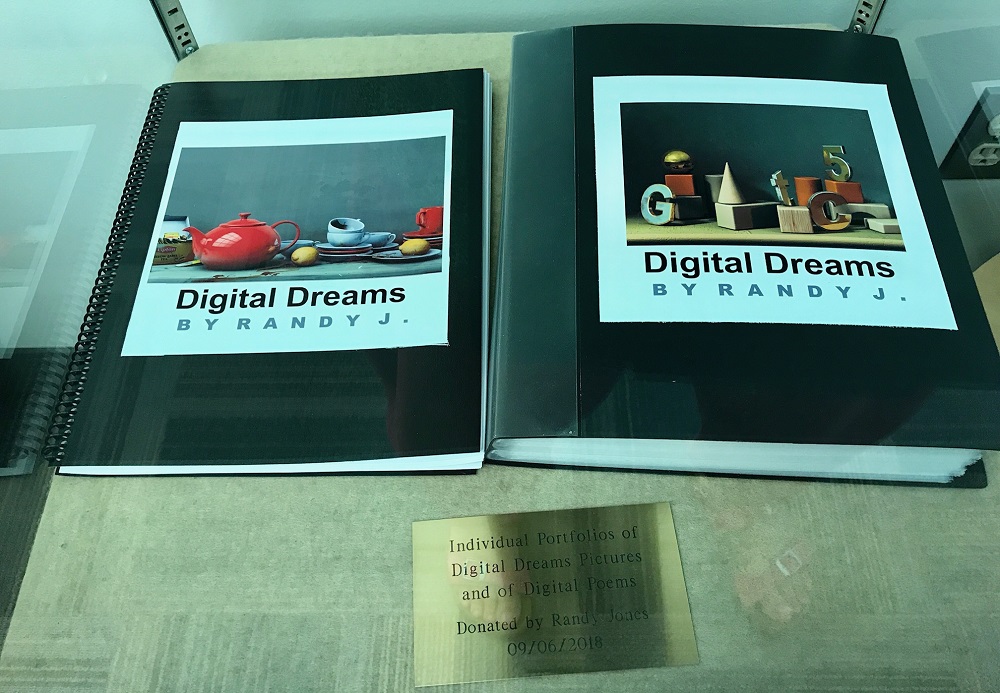 In 2018, the library was given a new piece of art created by Pepper D. Johnson, entitled "Social Unity #1." 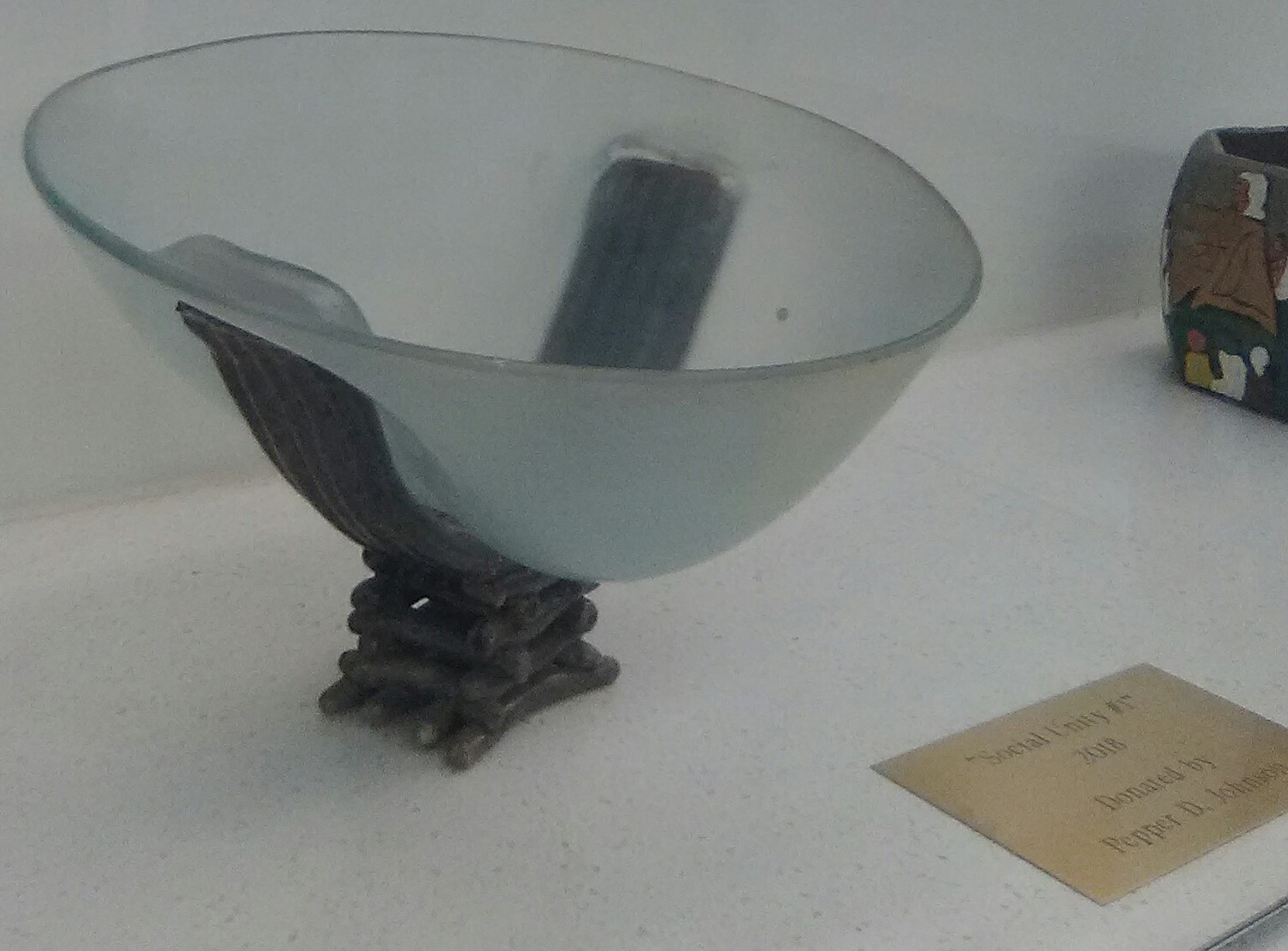 Comment below is paraphrased from Pepper Johnson's words about this work:

Social Unity #1 is a piece about clay representing what we see in life, or superficial reality.  Human beings are so preoccupied with objects and the surfaces of what they see, that we limit ourselves in our understanding of existence.  Holy Instants come and go, but often without enabling us to understand the experiences of the true, whole person.

The glass in this piece represents the unseen things that surround us.  There are so many forces placed upon us by our environment that challenge our well-being and limit our success.  But through it all there is a thin line that merges the two materials of glass and clay together, just as life shows that through the visible and invisible, the flood of it all, all things can be accomplished and unity can be achieved.  The fluidity of the glass evokes a thin line merging the two materials, clay and glass, into one object to show that the concrete, as well as the invisible shadows of life, ultimately create a Whole form.  There is a whole person that can achieve anything.

Here is a little more information about the artist, Pepper Johnson from her website linked here: http://www.peppertreearts.net/aboutme.html 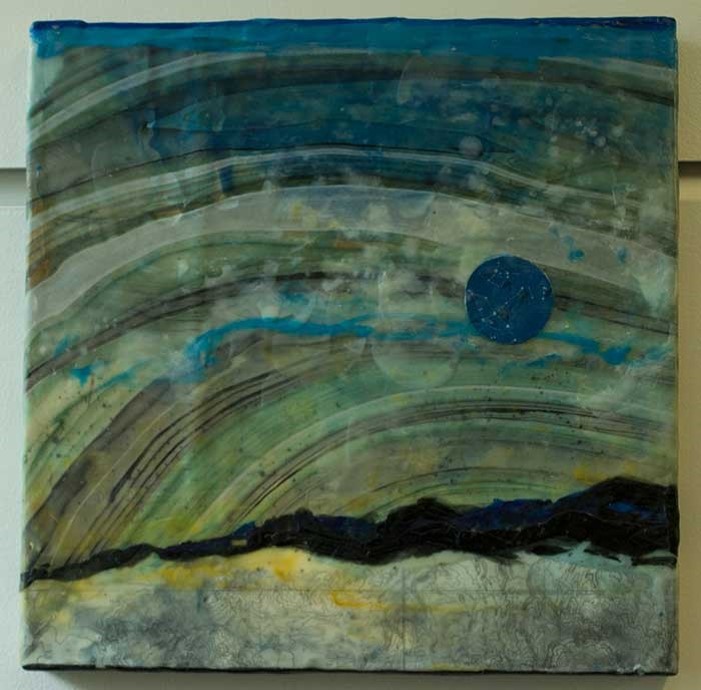 Please see more information about this work and this artist in the August 2017 Gallery Exhibit Archives.

This work is created with encaustic and collage and is 12" square. 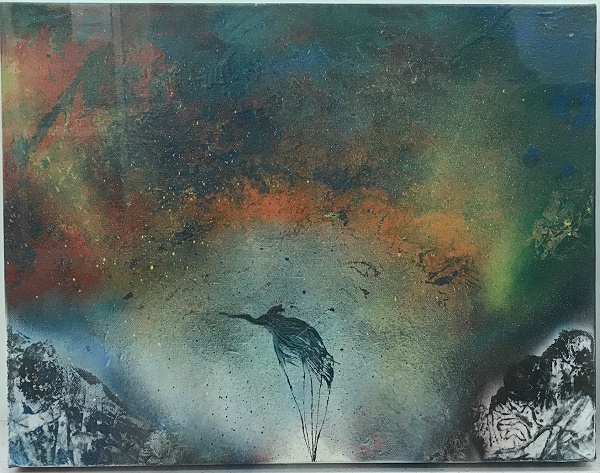 “Stardust is based on a documentary about a Puerto Rican man who took his ancestry test and traveled to all the places he came from.  One of his ancestral homes was China.  While there, he discovered a fairytale about a cricket that wanted to become a dragon.  I wanted to capture the power of that story.  No matter how small you are you can make a great impact.  You might never realize how much you can affect other people. Heder Ubaldo, artist, 2018.”

From the plaque with the painting

Information from Heder Ubaldo about the painting, “Stardust.”

I don’t actually remember the size of the canvas but I think it is 20 x 16.

How this painting was created --

So the short version of my background is the following. I moved to the U.S. from Mexico with my family when I was 8 years old and I am a DACA recipient.

This painting was heavily inspired by a documentary called Residente, in which the protagonist, a Puerto Rican musician, takes a DNA test and goes around the world exploring/connecting with his ancestors according to the DNA test. He ends up in China where he sees that many of their folk tales are about dragons and big animals. So he decides to write a song about a grasshopper that wants to become a dragon. In which the dragon represents all the grasshoppers coming together to form something bigger.

The main value in this painting is the story behind it and the process by which it was painted. Through the painting I wanted to tell a story about myself and how I came to be who I am today. Growing up I struggled with finding my place and fitting in. Just as in the documentary, I feel a strong connection to my ancestry and have learned to find my identity through it. Also, the environment in which I grew up in has had a great impact on my self-identity. This is all symbolized in “stardust”. I see this painting almost as a portrait. The explosive, colorful background represents my diverse ancestry ever-present wherever I go. The rock-like shapes on the bottom corners serve to give the painting a “beginning” or starting point. In the creation of this painting there were several “mistakes” I made some were fixed others were not, which perfectly mirror my life.  I have learnt from the many mistakes I’ve made throughout my life, however there are lessons I still need to learn. The insect in the middle represents me or/and my ideas growing/evolving to become something bigger, just as the grasshopper that wanted to be a dragon. With “Stardust” I feel like I am the combination of many grasshoppers forming a dragon, still I am a grasshopper on a journey to collaborate with other grasshoppers to form something bigger. Finally, I chose the name “stardust’ because it fits with this theme. In space new stars are created from remains of other stars and eventually those new stars will be the remains that will give birth to other stars.