Making Connections and Impact Through Art 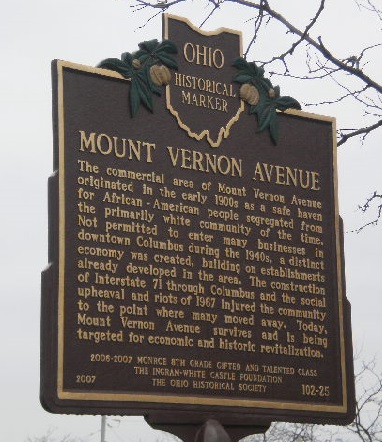 When the Library [Columbus Hall] was opened in 1973, Mt. Vernon Avenue ran past its front doors.   Elijah Pierce’s barber shop was nearby on Long Street and a few years later, Kojo Kamau opened his photo studio nearby on Washington Avenue.

The history of the Mt. Vernon area is a history shared by most of the artists whose works are on display today in the Library.  It is through understanding the history of the neighborhood that we fully appreciate the library’s art collection and the people who brought it here.  Aminah Robinson said, “But there is hope and hopefulness in reclaiming the history, the historical value of our lives.   Because that’s what made us who we are.”   (Future of the Mount Vernon Avenue)

Aminah Brenda Lynn Robinson, born in 1940, grew up in Poindexter Village.  Mrs. Ursel White Lewis came to Columbus in 1941. It was a time when the Mt. Vernon area was a vibrant place to live and work.  People who lived in the area could find all their needs met within the community.  There were thriving businesses, schools, churches, social clubs, and entertainment venues.  But more than that, it was a neighborhood where people knew one another and looked out for each other.

In 1979, they came together to form an organization called Arts for Community Expression (ACE).  Ursel White Lewis was on the board of trustees.  The founding members included Aminah Brenda Lynn Robinson, Roman Johnson, Henry Cade, Queen Brooks, Elijah Pierce, Kojo Kamau, and many others from the community.  Over the years ACE has sponsored three trips to Africa for artists and over 200 art exhibitions.

Columbus State Community College is proud to honor the work and legacy of our local artists and their supporters.

Check out  WOSU's look at the rich history of African Americans in the King-Lincoln district of Columbus.  This videodisc may be checked out.

Images from the Mount Vernon Neighborhood

View some old photos of Mount Vernon Avenue from the early to mid-1900s in the
King-Lincoln District Plan
City of Columbus
Department of Development, Planning Division
July 2002.