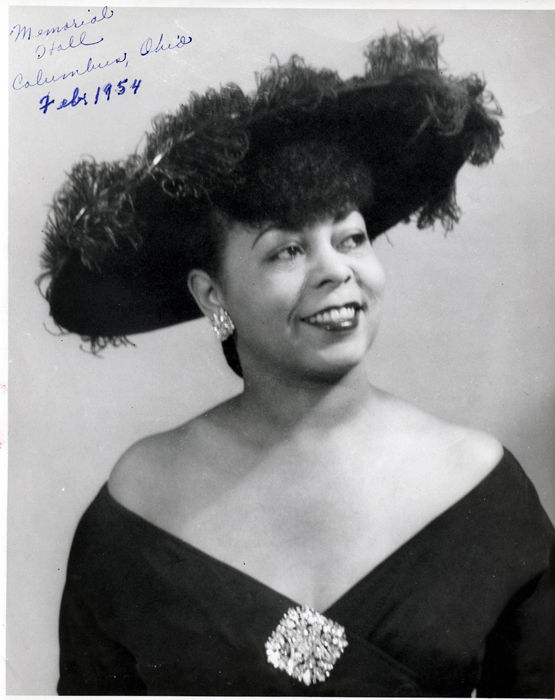 Daughter of Nina and Drum White and wife of Howard W. Lewis.

According to Aminah Robinson, Mrs. Ursel White Lewis was a hat maker.

Learn more in "Biographical Notes" below. 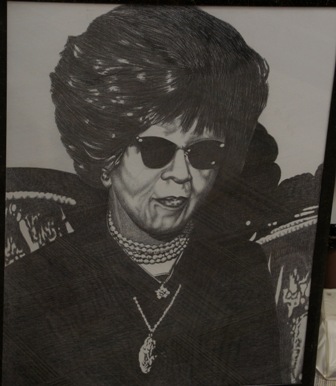 Ursel White Lewis began her collection in 1957 with "The Street" an oil painting by a young and talented artist then known as Brenda Lynn Robinson (Recently Ms. Robinson changed her name to Aminah).  It was not Mrs. Lewis' intention to start a collection, but it evolved due to her interest in Aminah's work and a desire to help promote the young artist.  During the 1950s, Mrs. Lewis was very active in presenting fashion shows throughout the Columbus community.  It was during these shows that she would display the work of Aminah and present the artist to those in attendance.  "I admired her art work so much."

Mrs. Lewis [said] that she ha[d] always been interested in art, and ha[d] been a frequent visitor to museums since 1930.  "I love art, I will buy it and enjoy it.  Whenever I can I will support an artist."  In 1963 another artist was added to her collection, Ed Colston, with a painting entitled "Portrait of my Father."  In 1971, Mrs. Lewis started collecting works by Elijah Pierce.  Through Aminah she met artist Roman Johnson in 1973.  In the mid 1970s she became acquainted with the works of Barbara Chavous, Henry Cade Jr., Kojo Kamau, and Charles Dillard.  Roosevelt Carter photographed all of her many fashion shows from 1949 through 1961.  Composer, vocalist, and painter Martha Abbott was a long time model for Mrs. Lewis from the 1950s.  Sculptor Elwyn Bush now residing in Detroit Michigan, is a cousin.

Mrs. Lewis [was] not wealthy, nor was she in those earlier years.  She worked for many years as a receptionist for a local funeral home.  She [had] retired and reside[d] with her husband on the near east side of Columbus.  "Many pieces I bought, a few were given to me.  Sometimes, if I couldn't afford a piece, I'd wait until I could, or I'd buy something I could afford.  I'd never ask an artist to lower a price for me or give me anything."

In 1972, for the bicentennial, Mrs. Lewis organized and produced a series of five exhibitions by local Afro-American Artists at the Bethel A.M.E. Church.  One of the most significant contributions she [had] made to the preservation of community heritage occurred in 1978.  In that year Mrs. Lewis undertook the mission of donating to the Isabelle Ridgeway Home for the Aged a portrait of its founder.  "I wanted to make a contribution to the memory of a great lady."

In 1912 Isabelle Ridgeway, a quite unassuming frail woman conceived of the idea of establishing a home for the aged homeless residents of the community.  With the help of others and her church, she succeeded in establishing the home which now bears her name.  It was not uncommon to see Mrs. Ridgeway with a market basket on her arm going from door to door begging donations of food and clothing for those under her care.

During the time that Mrs. Lewis was working on this project she was taking art lessons from Roman Johnson and she asked him if he would create the portrait.  Obtaining funds was not an easy effort, but with the support of friends and concerned community members she was able to achieve her goal.

Mrs. Lewis contribute[d] to the support of local artists through personal involvement.  she encourage[d] others in the community to lend their support through phone calls and letters.  From her many reading sources she collect[ed] information and sen[t] it to artists and those who might benefit from it.

Through her efforts and donations, works by some of our prominent local artists have become part of the permanent collections of the Columbus Museum of Art, the Schumacher Gallery, and the Zanesville Art Center.

While Mrs. Lewis ha[d] always been supportive of Black artists, her collection [was] not limited to their works alone.  Mrs. Lewis love[d] art, and art is created by artists of many hues and ethnic backgrounds.

The Permanent Art Collection at the Columbus State Library was started with donations of work from local artists by Mrs. Ursel White Lewis in the 1980s.  Mrs. Lewis is known as the first African American Patron of the Arts in Columbus.  She became interested in art as a teenager living in Kansas City, Kansas.  She went to see the Chinese Art display at the Nelson Atkins Museum of Art and was so taken with the exhibit that she... "purposed in my mind to visit one museum after another, no matter what town I was passing through or living in"(Anderson 2).

Mrs. Lewis was not wealthy.  For 30 years she worked as the secretary for the C.D. White and Son Funeral Home.  To support fundraising for the Bethel A.M.E. Church, she started organizing fashion shows in 1949.  She continued putting on style shows for the church and for different clubs.  Around 1957, Ursel White Lewis started supporting the work of Aminah Brenda Lynn Robinson by displaying her work in the fashion shows.  Mrs. Lewis eventually decided to stop doing the fashion shows and opened Ursel's Hat Shoppe.

Mrs. Lewis understood the importance for artists to have their work shown in galleries and museums.  She made donations of art to the Columbus Museum of Art, the Zanesville Museum of Art, the Capital University's Schumacher Gallery, and of course CTI/Columbus State.  Her legacy continues with donations  to the Library at Columbus State from Kojo Kamau, Vivian Pitman, Barbara Thomas, and others.

Anderson, PamelaJune (PJ). Lady Lewis: Her Hats, and Her Gloves:
The Conversational and Pictorial Memoirs of Ursel White Lewis, the First
African American Patron of the Arts in Columbus. Columbus, OH: Kojo Photos, 2007.

Artist Henry Cade Jr. presided over the unveiling of the work, entitled, "Life and Times of Alonzo Jackson," reading a description of the work that celebrates the life of an ex-slave who joined the Union Army during the Civil War and lived to be 103 years old.

Library Director Bruce Massis said, "This was a wonderful event involving the Columbus community.  This donation adds to our expanding permanent art collection of other works by Ms. Robinson, Mr. Cade, Elijah Pierce and others.  We are very grateful to Mrs. White-Lewis for her generosity." 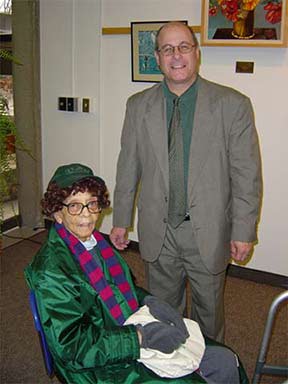 Source of photography and article below are from Monday, 8 January 2007 Update:
"Art benefactor visits ERC [Library]"

A Historical NAACP Piece from the Collection 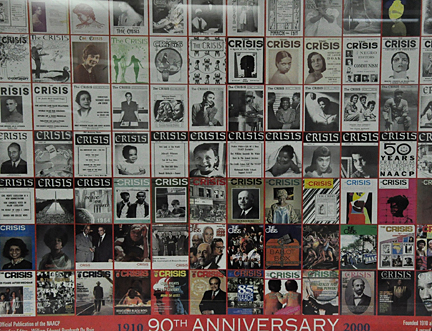 Artist: Published by the NAACP 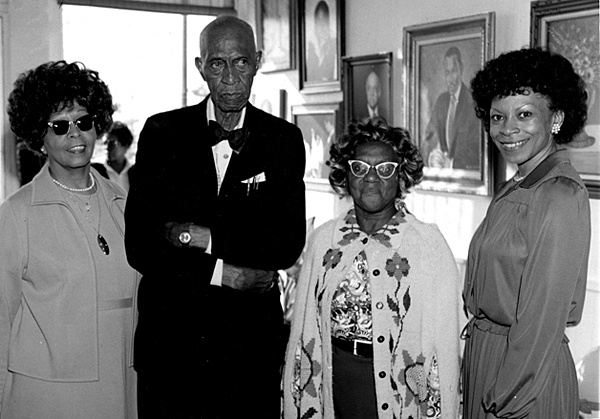 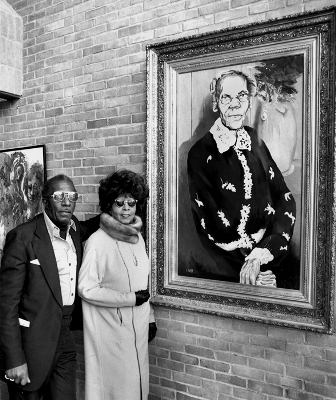 Search for Ursel White Lewis in the Columbus Metropolitan Library's Columbus African American Collection or click on the link below: