Can you give us any new information about the artist Vivian Pitman?

We'll add it to this page. 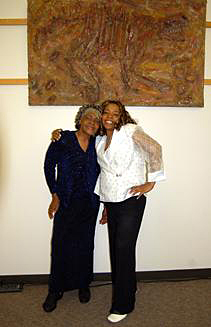 I have a story that is very interesting.  My niece gave me a puppy, named Dino.  I had him for two years.  One day Dino was watching me very close. I went to look for my tube of paint and could not find it.  My God, am I going crazy?  Well probably just my imagination.  I call Mom and ask "can I borrow some black paint? I can't find mine.  Lord behold! My puppy was taking my paint and some of my paint brushes and hiding them under the couch.
I guess he was doing this because I was spending more time with painting than him.  So what I did was I made him a paintbrush out of an ink pen with a piece of sponge tied to the end of it.  Dip a little acrylic paint.  I go "Dino, Dino Picasso paint me a masterpiece!" just being silly.  The dog walked around the canvas twice and started painting with fast head strokes.
I told my Mom.  She said "I don't believe you." She's seen it for herself. He will not paint in front of everyone, he gets hyper, just me and my mom.

Note: Vivian Pitman's and Barbara Thomas' art is no longer at the Lindsay Gallery. 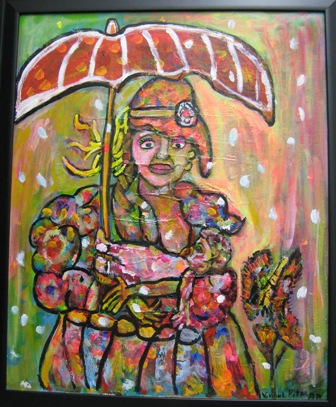 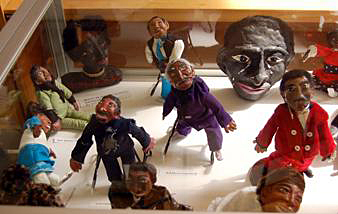 I am a self-taught artist. I love art. It is a big part of me. I thank God for raw talent. Some folks say I have a third eye. I can see the art finished before I complete it.  I try to explain it to my Mom she says "I don't understand. Show me when you finish it."

I started getting interested in art after traveling and admiring great artwork.  What motivates me to create is the inspiration, the imagination, and the energy I feel.

I am working on some of what I call my masterpieces. It is the nativity scene with the three wise men, the star of David, baby Jesus, a donkey a sheep and a cow. Why do I call these my masterpieces? The time frame and the monies I've spent – I've been working on this project for about two years.  It is the hardest artwork I ever did in my life and is a very costly project. For my masterpieces, these are the materials I will be using:

When I'm doing my art and I'm feeling challenged I ask myself "I wonder if Vincent van Gogh felt this way?  I sometimes feel discouraged being an artist and giving up time and money.  I wonder if I'll be successful while I'm alive.

Sometimes I talk to my artwork, like people talk to plants.  For example, one of the wise men fell.  I'll say "Please behave, stop falling on the other wise man.  If you stop falling I promise to finish you first, ok?"

I had a presentation for Conversations and Coffee at the Cultural Arts Center in 2003. Thank you Ellen O'Shaughnessy for your support.

I made several dolls representing Nat King Cole, Marian Anderson, Langston Hughes, and Mahalia Jackson. I painted several pictures, one called “A Negro Death by the Klansman,” “These are the Slaves that Built the White House,” etc.  I also had a show by Kojo Kamau and received a certificate. Thanks Kojo and Pepper for your support.

Ann Starr wrote a beautiful write-up in her bi-weekly column called, “You Call that Art?”  in the Other Paper For the Art for Community Expression (ACE) Inc. which was displayed at the Columbus Cultural Arts Center. The article read “and across the room, a large, raw, sculpted woman's torso with uplifted face by Vivian Pitman dominates a corner… Pitman’s untutored work lacks finesse, but its directness clobbers your heart.” (See Ann Starr's unedited version of this article two boxes below.)

Ann Starr wrote another article the themed “Hop, Skip & Jump” indicating one of the largest collections of famous black artists-outside a museum.  “Any day you visit, you can look at wood carvers Elijah Pierce and Roy Butcher, and painters Smokey Robinson, William Hawkins, and Vivian Pitman who paints and sculpts.”  I was thrilled and honored, because my art work is greatly appreciated.

I donated and gave several pieces of art work away also -- To St. Stephens and to the Columbus Museum of Art.

I won an award many years ago designing hats, a special thanks to the Ohio Arts Council. Thank you Liz James also for the wonderful write up. (Click on the link in the box immediately below) I also had a show at the King Arts Complex - thank you Betty Stull. Thank you Shona Wainwright, Bruce Massis and all the staff for making great efforts supporting the artists. Daryl Brown thank you also.

Glad my reviews can be useful to you. Attached are two reviews of Vivian Pittman that I submitted to The Other Paper. Both were printed, but I'm sure there were editings, so I can't claim that what you see here is exactly the way they showed up in the paper. Still, this is what I had to say!

Congratulations on your efforts to get students in touch with Columbus's fabulous artistic legacy! I'm proud to be part of your effort.

Ann Starr     NOTE: This is part of an unedited review written for The Other Paper

When you go to the Hop, don’t miss the Lindsay Gallery (986 North High) and Vivian Pitman’s “Cleveland Avenue.” Ms. Pitman may be an untrained painter, but she is quite an accomplished observer of the neighborhood she loves. She recreates in her paintings every detail of the signs on the corner stores, nail salons, and gospel missions. She pictures her neighbors leading normal lives, including her family, happily lined up on her mother’s front porch.

That mother, Barbara Thomas, is also featured in the Lindsay show, with story-telling quilts and with dolls. Her “hurricane quilt” is completely charming. A tornado descends from the sky as birds flee. The chimney literally detaches from the house, and the plants are uprooted from the earth—and from the quilt.

Vivian Pitman takes you home in her current show at the Lindsay Gallery, “Cleveland Avenue.” Her acrylics earnestly record the details of her neighborhood’s look and daily life.

Pitman’s view of the Avenue is lovingly anti-romantic. She enumerates every brick on a barber shop’s façade and each shape in the security gates protecting a mission church.

A scene of two women eating at a table outside a McDonald’s jumps with the brilliance of fast food red and yellow, and deep, impasto green grass. “Urban blight” turns into an idyll. Likewise “Auto Park.” Before the black, white, and red graphics of the Advance Auto Parts she parks purple and sky-blue sedans for an eye-popping City Modern moment—hardly a curse of commercial exploitation.

Pitman determinedly records every word on the signs she captures: “National Rent A Fence,” complete with its 800 number, attached to a hurricane fence. She copies the graphics and graffiti with fascination: the wall of a whole building covered with surreal, creatures in brilliant colors, comes across like a deep-city art-zoo, a work of wonder and joy.

Pitman captures the colorful details of people too: three girls with their nails just done, each with her own color, complete with tiny painted designs. And she faithfully records the real dress on the street, especially the colorful, fancy dress of churchgoers on their way to the many houses of worship she depicts.

When it comes to the churches, Pitman allows herself to move into a different mode, and to record what her third eye sees. At the Evangelistic Center, at C.R.A.C.K. House Ministries, and shining massively atop the New Salem Baptist Church is Jesus. He is as evident and palpable as any of the congregants arriving for the service.

Vivian Pitman brings to mind another Columbus woman who has painted her own neighborhood. Aminah Robinson’s commemoration of Mt. Vernon Avenue is well known. (The original mixed media work of “A Street Called Home” hangs in the Columbus Museum of Art on the first floor.) Pitman’s work uses the proportions of a viewfinder. Robinson’s, however, remind us of a river. Robinson works with the river of memory and the myth that she shapes from it. She is a poet and a teacher, a wise woman with a vision that she is passionate to impart. She is not a folk artist.

In “A Street Called Home,” Robinson specifies a few important characters visually, such as the Brownyskin Man, and Dr. Kikapoo, Others have names assigned them (the Jolly Teens have names written on them). But most of the vast cast on the abundant, happy streets, is simply babies, mamas, workers, and merchants: people fulfilling timeless roles in timeless garb in a beloved geography. This piece is about the values and lessons of the past. It is about what love continues of people and place gone by.

Robinson’s work is homily, deeply digested. Pitman’s has to do with the triangulation of the powers of eye and vision, in the moment, where she stands, well grounded.